It takes two to tango, but you don’t need a partner to dance with cocoa puffs.

Earlier this week, I had a phone call with a 28-year-old traveling, blogging, adventure-loving lady who is determined to make her life as rich with new experiences as possible. Having been in four relationships thus far (the last of which was three years ago), she has since been focused on figuring out what she wants for herself before bringing someone else into the picture.

Megan McFarland is refreshingly honest about both the ups and downs of leading an independent, globetrotting lifestyle; five minutes into the interview I had already become her #1 fan, and by the phone call’s end we were making plans to meet up for coffee and more conversation.

Because Megan is a fellow wordsmith, I chose to have her write out all of her responses to my questions. (A few trimmed recordings of our very long phone conversation are included throughout the post.) So without further ado, here are some thoughts on singleness from one of the coolest singles I’ve encountered yet.

Every Single Thing: There’s a distinct difference between choosing to be single for healthy personal reasons and simply pushing people away. What are your reasons? Have you ever found yourself in the latter camp?

Megan: In my young twenties, I did this [pushing people away] quite a bit. To be fair, I didn’t know what the future held for me personally, so it was difficult to feel secure handing over part of my life to someone else. Sometimes I pushed too much and ended up losing someone I truly cared for. It’s an experience I learned greatly from and one I’m thankful I had. There are mistakes we make when we’re young so that we don’t make the same mistakes again later on when the stakes are higher.

As for choosing to stay single, it is completely up to the individual, but it’s easy to overdo it and miss out on someone who is really great. There are times we need to decompress and get our minds back in order before entering a new adventure with another person. I’ve seen a lot of people make the mistake of getting into a new relationship too quickly after a previous breakup. I did that once and the result was detrimental. Wanting to be healed and being healed are two very different things. Unfortunately, we can’t choose the length of time we feel hurt and we can’t force the hurt to go away; it just has to happen in its own time. (I think I went off on a tangent.) Anyway, the point is, choose to stay single when that’s what you need to do, but a pure connection is hard to come by—regrets stem from passing them up.

How do you learn more about yourself outside of a relationship than you do when you’re with someone?

Being single, I have definitely learned how to rely on myself for my own emotional resilience. Of course I have friends on whom I lean when times are tough, but for the most part I am the one picking myself up when I fall. There is also no one making decisions of any kind for me, and–as freeing as that sounds–I think everyone has times when they don’t want to be the one doing the thinking. I’ve had no guiding light except myself, and that has been a challenge; one that has been both enjoyable and frustrating, and one that I needed in my twenties.

The idea of relying on yourself is, to me, extremely imperative, because there are no guarantees in life. What if you find the love of your life and they leave you? What if they die (one of you will die first anyway), and what if–God forbid–it happens early on? You have to know yourself. It’s a nonnegotiable for me. Relationships are valuable teachers as well, and they have helped me learn a great deal about myself in a different way…but there’s nothing like walking into the unknown alone.

It’s common for singles to feel pressure from family, friends, society, or even themselves to be dating or already married. Have you ever dealt with this pressure? How do you combat it?

Ohhh, yeah. I have felt this in the past. I think I felt it most at age 25. That year I really felt like I had to have my life together in general. But it has also been a rollercoaster of a process. In college, I felt this very little because I knew I was still young (even though I liked the idea of meeting my husband in college). Then after college, I knew I wanted to travel, and I was still young. Once I traveled, I thought, “Okay, get it together, settle down, be an adult.” But my heart truly had other plans and I had to listen—travel, see the world while there’s nothing keeping me put, and enjoy this unrooted time while it lasts.

At 28, I feel younger than I’ve ever been and I’ve found peace in knowing that I probably won’t actively start dating again until I’m 30 or 31. Teenage me would think that’s absurd, and the looks I’ve gotten from older adults when I explain my lifestyle, boy, I wish I could take pictures—that would make a fun photo album! It’s just that the older I get, the less I care about the judgment of others. It takes a lot of practice; you have to confidently (or pretend to confidently) stand by your principles. At the end of the day, you’re the one you have to answer to. I won’t be with someone for the sake of being with someone, and since that hasn’t happened yet, whatever society dictates is null and void to me.

That being said, I’m not perfect. Two of my friends recently got engaged within maybe two weeks of each other. There was a total “I’m so behind” script playing in my head. But because I’ve been practicing for so long, it’s easier to flip the script— I’m moving to Australia for a year, there are countless adventures ahead, and my path is different from the paths of others. Comparisons are poisonous to an otherwise happy mind.

(Also, my mom is going to kill me, but she definitely hints that she wants grandchildren. How do I know? She says, “I want grandchildren.”)

Are you currently open to the idea of being in a relationship? If so, are you actively looking or just waiting for it to happen in its own time?

I am open because, like I said, I don’t want to miss out on something great. We are hardwired to connect, to have friendships and relationships. Although I’m not actively looking–I have some long-term travels coming up so it just wouldn’t be fair–if I meet a guy who has the same values and lifestyle and we really hit it off, I won’t push that away. As much as I believe in enjoying the single life, I do not at all believe in pushing people away who don’t deserve it. And don’t we all owe it to ourselves to embrace others who bring us happiness?

You mentioned in our email conversation that “being single is the definition of seizing the day.” How are you making the most of your life while you’re unattached?

When you’re single, you can do anything you want to do. You want to take that trip? Take it! You want to sing at the top of your lungs until 2am? Sing, man! You want to dance around in your underwear eating cocoa puffs? Dance away! You got a job promotion that will take you to a new city you’ve always wanted to live in? Guess what? The number of other people you have to consult with on that one is ZERO. There is no one around to judge you for any of these things or tell you not to do them. Literally. ZERO. Do whatever you want to do. (But also, do you really want someone who prefers you don’t dance around in your underwear eating cocoa puffs?)

I think this is lost on so many people, and I get it. I’m an introvert—putting myself out there takes a lot of energy and courage. But, hello, why am I letting the lack of a partner dictate my fun? If there’s anything I wish I could imprint onto people’s brains, it’s this: Seize the day while the day belongs only to you.

What is your favorite solo activity? Why is time alone important to you?

Solo travel in general has been a great exercise in pushing my limits. Again, traveling solo did not come easy, and for many years I really wasn’t that good at it. But just like with the previous question, solo travel means not adhering to anyone else’s schedule or interests—you do only the things you want to do when you want to do them.

For a simpler and more boring answer: I really love going for walks. Like I said, I’m introverted, and honestly I can never have enough time to myself. Of course I need social interaction and I cherish my friendships to the core, but having time to myself to gather my thoughts–all the while enjoying some fresh air–is critical to my well-being. Heeding the advice of others has its place, but our guts tell us what we need to do. My gut speaks best in silence.

What is your funniest story from singlehood so far?

Ha! I don’t think there is one particular story, just the heads all turning my way when a guy comes up to a table I’m sitting at with my friends and asks if any of us are single. (Also, guys: The way to woo a lady is not by asking the general girl group if anyone is single. I mean, I get it, you want to cut to the chase, but…don’t.)

In your opinion, what is the biggest thing people get wrong about singleness? What do you want to communicate to those who think being single is an inherently negative thing?

I suppose people think that singles don’t want to be single. I may be wrong about that, but I do think society greatly influences people’s perceptions about singleness. Women especially seem to have this invisible label on their foreheads, as if all single women are lonesome without a man. In my experience, relationships have actually not made me feel less alone. The quality of the relationship is leaps and bounds more important than the label of single or taken. They aren’t even comparable. This is something my young twenties taught me.

I am incredibly happy having a life that is completely my own, knowing that if and when the right man does come along, it will be because we complement each other–not because we believe being single is bad. This idea reflects more on the judge than the judged; if you have the idea that being single is negative, you have to ask yourself why you think that way and what that might mean for you.

One thought on “Megan McFarland: Seizing Every Single Day” 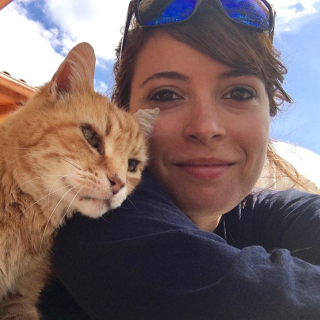